They say that the weather in southern Queensland is “beautiful one day and perfect the next”. So far that adage has rung true, the weather has been unbelievable! As we move north the temperature climbs as does the humidity but having spent time in Mexico before our arrival in Australia it really has been a fairly easy adjustment as we have had time to acclimatize to the heat. We only had an easy drive to Agnes Water today which was nice, with no real schedule we can make our way north at a leisurely pace. This really gives us the freedom to pull off whenever we see something of interest. If you’re going to visit Australia TAKE YOUR TIME, there’s just so much to see and do in every different region.

We arrived in Agnes Water around noon and pulled into town to grab some supplies…. Well beer and ice ;).
Australia Travel Tip for today; Get your ice from the larger grocery stores when your in bigger towns as ice in little beach towns like Agnes was $4.50 a bag!

We cruised around Agnes Water and the neighbouring oddly named town of *1770. After getting the lay of the land and these pretty little surf towns we head just south of Agnes to the Workman’s Beach Campground, a beautiful little spot set back in the bush. With a number of sites (all unpowered), a grassy day use area, toilets, showers (outdoor), BBQ sites, lots of shade and at only $6 per person per night it makes for an amazing place to camp as long as you’re tenting or sleeping in your vehicle. If you’re travelling in a larger camper or with a trailer you will want to look elsewhere as the sandy road into the site and low hanging brush make it inaccessible. There is also direct access to Workman’s Beach from the camp site, a quick walk through the bush and down the embankment from the day use area and you’re on a beautiful protected little beach. There are a number of large rocks on either side of the beach so if you’re surfing during high tide make sure you know where hey are.

We set up camp made lunch and headed to the main beach in Agnes to check out the surf and relax. We had a beautiful lazy afternoon in the sun as the surf wasn’t great. The white sand beaches of central Queensland are absolutely beautiful, with school holidays starting we couldn’t believe how empty the beaches have been, even in popular areas like Agnes Water. Being summer it’s stinger season so many people avoid the ocean as a run in with a Box Jelly or and irakangi can be at best extremely painful but can also be deadly! After a great day at the beach we headed back to the campground to spend sundown at Workman’s Beach, as we made our way down to the water we ran into a surfer on his way back to his site after an evening surf, he must have been 70! I hope I’m still active enough at that age to be surfing and camping. We go back to camp for a spaghetti dinner and a couple beers, we bought a great Coleman travel lantern from Canadian Tire before we left home and it has been brilliant! A small travel version of the large lantern we own it has 4 removable sections so it can be used as one unit or take the individual lights off to spread the light around your tent or cooking area. For such a small little lantern it throws a ton of light and makes life easy when cooking after dark or trying to read or play cards in camp at night.

We were up which the sun the next morning, I’m not sure if it was the heat or the excitement of going for a morning surf and christening my new board! After a quick breakfast and a coffee we broke camp and set off for the beach. It was a perfect morning, sun was shining, the water was warm and clear and the surf was good but not huge which was good as I’m still a beginner – intermediate surfer and believe it or not Carly my Australian wife was trying surfing for the first time! After a quick beach demo for Carly we hit the water. What a way to start the day! Not exactly a display of surfing prowess but we had a blast and both got up a few times enjoying every minute of being in the ocean. My new board is amazing, the 7’6 Mini Mal is fantastic for my skill level and I find it easier to get up on than the shorter boards and easier to handle and paddle In the waves than a full blown 9′ plus Malibu. If you missed our first post I got the board from Sideways Surf Outlet As the morning wore on the surf got bigger and it was getting on in the day, so exhausted we reluctantly grabbed our boards and jumped in the truck and set off for Carly’s old stomping grounds of Rockhampton, Yeppoon then on to Airlie Beach, the Whitsunday Islands and the Great Barrier Reef!

More pics to come when we get to a computer to upload off the camera! 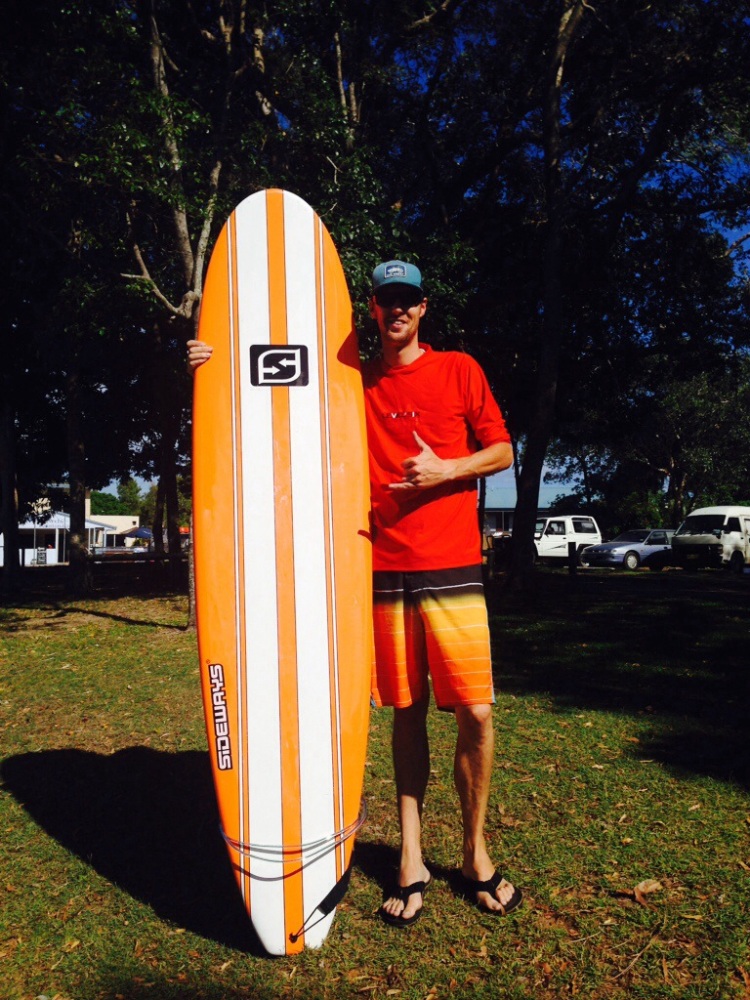