Being back in Australia has been incredible so far, for Carly it’s always great to be home and for me there has been a real sense of familiarity after our brief visit last year. Seeing family and old friends has been amazing for both of us and we’re still humbled by everyone who came to share the day with us in Manly for the Wedding celebration. I must mention the night before the Aussie wedding party we met some of the family at the Waterloo Bay Hotel for “tea” (Australian for dinner). The Waterloo Bay Hotel seemed to be no different than any other pub, a restaurant section with a nice outdoor seating area, a gaming room aka “pokies” with video gaming machines etc. but I was wrong! Carly’s uncles were insisting that I come to the other bar to get a drink with them, already having a beer I was confused but it seemed important so I followed them to the other room. I had been to a few pokies joints before and I still didn’t get why I had to see this one. It turned out that it was Thursday which meant topples servers! NOW I got it, the brunette working was certainly worth walking to the other bar for, cheers gents! Gambling, sports and servers in nothing but a g-string! Australia, what a country.

After the party on the 29th our focus switched to gathering gear we needed for our road trip and of course finding a vehicle, an essential part of any road trip. We had been checking a number of websites that backpackers use to post vehicles in Australia spending most of our time searching the listings on Gumtree We ended up finding a number of potential vehicles all listed at Southside Auto Auctions located in the Brisbane suburb of Underwood, so drove down for a visit. On our first trip we found a great looking Mitsubishi Pajero AND it was a turbo diesel! After chatting with Mark from the sales team about the process and additional costs (registration, government fees etc) we put in an offer of $4,000 to the owners. Our offer was accepted! However after a closer mechanical inspection the old Pajero didn’t live up to its looks. Mark was extremely helpful and understanding we wanted to get moving as soon as we could said to give him a few days and he would find the right vehicle for our trip.

We hitched a ride with Carly’s brother Luke down to the Gold Coast for the weekend to relax and enjoy a little luxury before living out of a tent for the next few months. Carly’s mother had sprung for 2 nights at Jupiters Hotel & Casino in Broadbeach, just south of Surfers Paradise. Surfers Paradise is a bit of a tourist trap and a little busy for us but still a cool spot to visit and the hotel was great. Being up at Broadbeach is a little more relaxed and the beach itself is beautiful. We had plans to surf the days away and enjoy nice dinners out on the town, however after a busy couple of weeks and 2 weddings we decided to spend our days strolling on the beach and that’s about it. In fact the second night we ate in our room and watched Shark Week until we passed out! Sounds a little lame I must confess but it was brilliant!

We returned to Brisbane Monday afternoon and popped into Southside to see Mark. After a quick walk around the yard we found a couple of trucks that might fit the bill. Keeping in mind the areas of the country we are visiting there were certain things we had to have, like 4×4, decent ground clearance, ample room for us and gear and bull bars. The bull bars really are essential as we’ve been told driving as many miles as we are NOT hitting a kangaroo is unlikely (really hoping we can avoid this). After narrowing down the list with mark we decided to put in an offer on a 1989 Toyota 4Runner, a little older than we wanted but it had low Km’s, was in great shape and had just about all the features we were after. We were able to talk the owners down from 6k to $4,100.00 and after three long days of waiting for mechanical inspections etc. we had our chariot! If you’re looking for a affordable vehicle in the Brisbane area we highly recommend both Gumtree and specifically Mark from Southside. To make the day even better we popped into Sideways Surf Outlet and after a little negotiating with Carly I was able to buy a new surf board! Being the giant I am I opted for a 7’6 mini mal which is a slightly shorter version of the classic Malibu style long board. If you’re in the market for a new board at a great price or for any surf gear check out Sideways! It’s a discount surf shop with incredible prices on everything you need from clothing to boards. I got the board, fins, a board bag, ankle leash and sure wax for $400! A new truck and a new surf board in one afternoon, now that’s my kind of Monday!

Having the extra days in Brisbane worked out well as it gave us time to get all the gear we needed and allowed us to catch up with some friends from Banff who are back in Oz. We went out to the Sushi Train for dinner with friends Carla and Drew on Wednesday night, it’s actually scientific fact that everything tastes better when it arrives to your table by train! It was an interesting experience as I have never been to a restaurant where you can BYOB, but this was the case at Sushi Train and the staff will even put your beers in the fridge for you!

We picked up “Tanner” the Toyota on Friday afternoon and rushed home to pack up. In the excitement to get on the road we overlooked the fact that it was not only a Friday afternoon but it was the last day of school before summer break for the kids and we payed for this oversight but fighting brutal traffic trying to get out of the Brisbane area! It was slow going but we were finally on the road and loving it, wrong side of the road and all!

Our next post will include Brisbane to Rainbow Beach, Ewan’s first Kangaroo in the wild, Agnes Water and more!

Be well and chat soon! 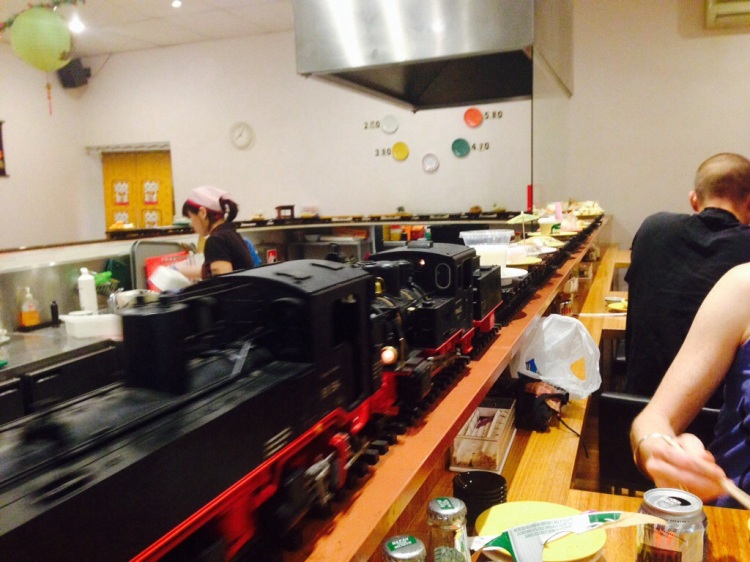 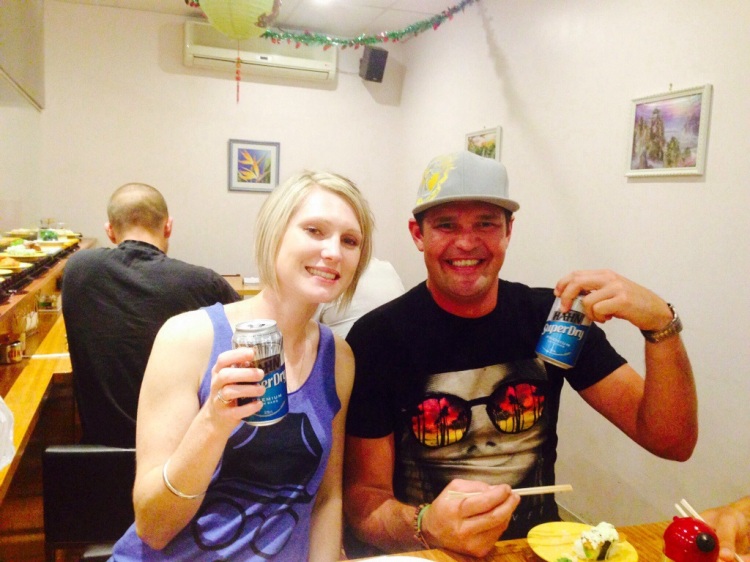 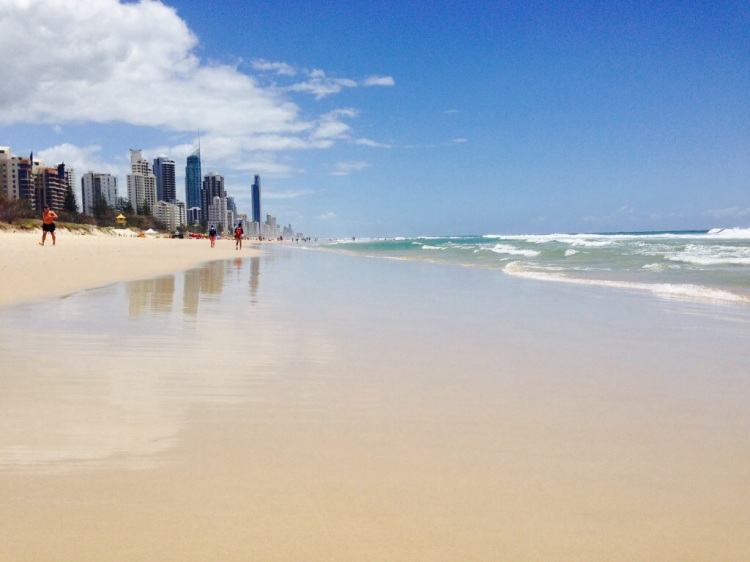